Originally created in the early 2000’s, Solo-Step’s main purpose was to find a way for patients to securely perform their rehabilitation exercises without fear of falling or injuring themselves. To allow more freedom of movement along the track, Solo-Step asked CDN to design a switch system. Adapting to the existing extrusions to expand the use and capabilities of the Solo-Step track, we were able to create a switch that conforms to the same robust design standards to pair with the track perfectly.

The Solo-Step Fall Protection System consists of a high-performance aluminum track, trolley, and an attached harness, which prevents patients from falling. The Solo-Step System not only minimizes risk of injury to the patient, but also instills self-confidence, builds strength, and increases productivity. Reducing the risk of falls also minimizes the risk of injury to the caregiver, allowing the facility to limit liability risks.

Since implementing the switch, both patients and physical therapists are allowed more freedom to where they can travel using the Solo-Step track. The switch has three positions, which can accommodate to the needs and movements of any patient.

Not only was CDN able to update and improve their existing system through provided design and engineering services, but we completed production, final assembly, and distribution to the end user. 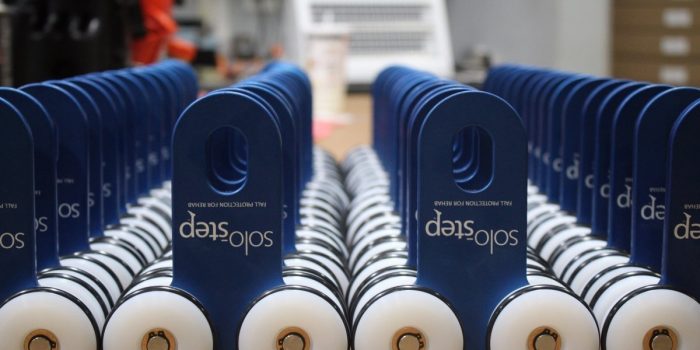