The plastic injection molding process is arguably the most common process in product manufacturing in the current age by volume of parts.  With the array of high performing materials available now, it’s like having the entire Marvel comic universe full of superheroes at your disposal where your dad’s generation had Popeye.  Nothing against that guy – he got me to eat my leafy greens, but he was kind of a one trick pony.  Properties of plastics now make them suitable for things you wouldn’t have even imagined possible just a few decades ago.  Injection molding quickly and inexpensively shapes these plastics into useful parts.  You’ve got to “ante in” with the tooling, but the rest of the game is great. 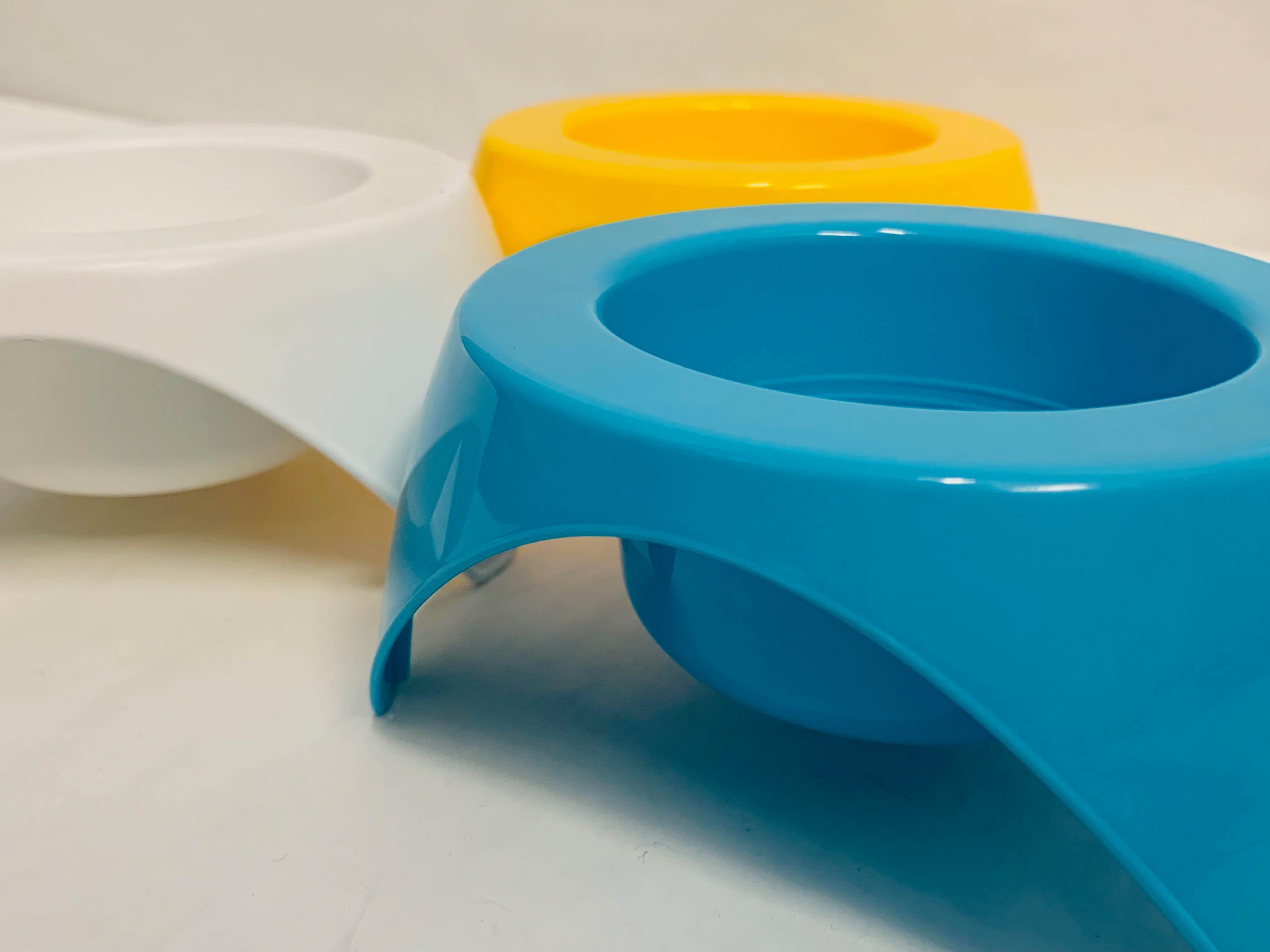 What is the Injection Molding Process?

Okay, now that we have that out in the open, let’s talk about specifics.  The simplest mold for injection molding will have two halves with some material machined out of the center of them.  When they’re closed together, the halves seal off the edges and leave an open space between them that will become filled with plastic. 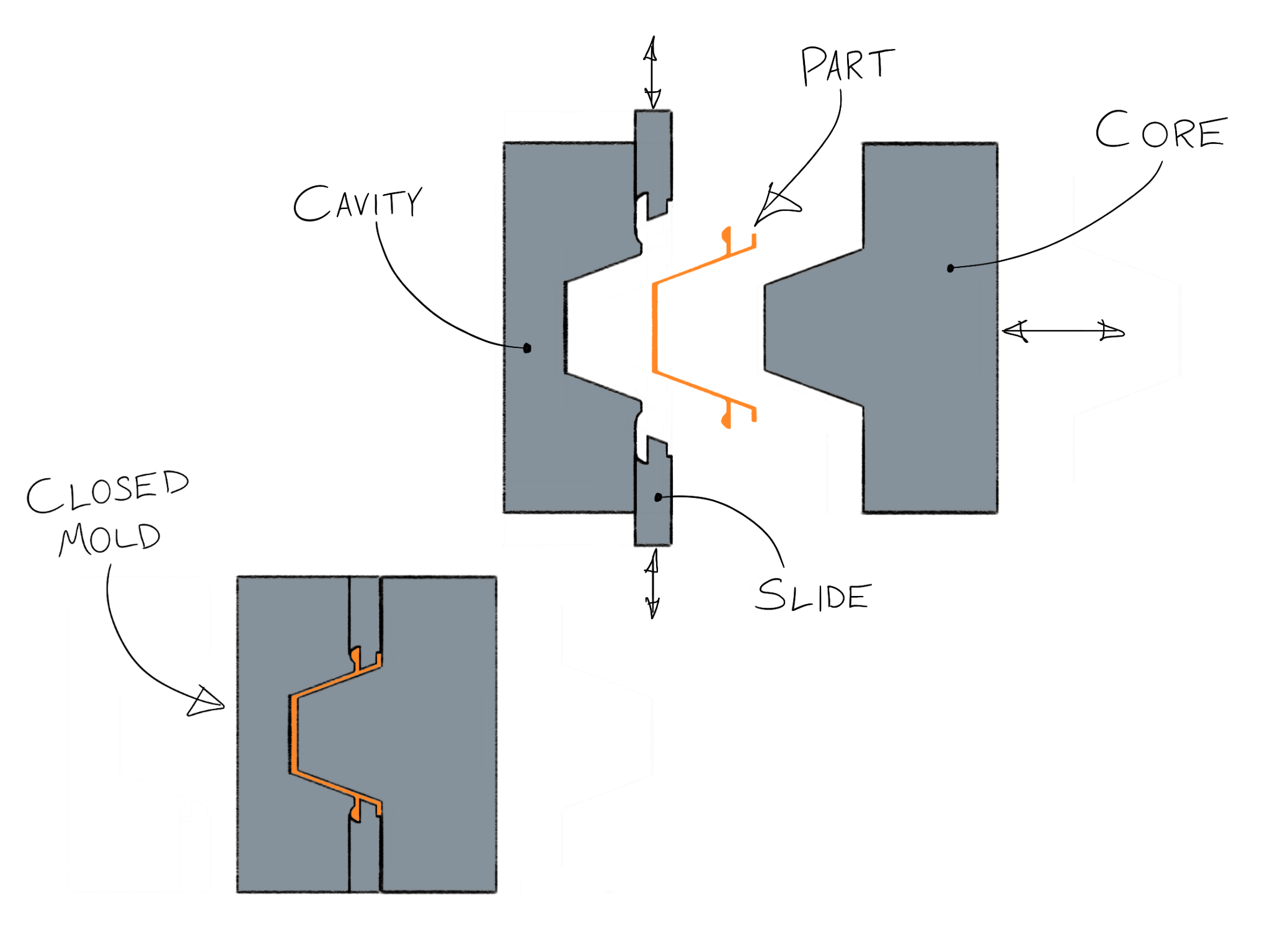 The plastic heated to a liquid state when injected, but quickly cools and solidifies (somewhat – kind of like the spray paint you used last weekend that said “…dries to the touch in 15 minutes, subject to normal use after 18 years”).  The point is, the part must be shaped so that mold halves can split apart, and the part can be removed without breaking it into pieces.  If that can’t be done, it doesn’t necessarily exclude the plastic injection molding process, but the mold tools become more complicated and expensive.  There is a limit to this complexity though and experienced designers know to hold this principle in mind during concept development.

What is the Design Process for Plastic Injection Molding?

Industrial designers working on a plastic injection molded part may sketch out some outlandish contraptions to get started, but they’ll trim and turn and massage the shapes in ways that simplify tooling.  They’ll also try to conceptualize things that have even wall thickness.  We mentioned the “dries to the touch” analogy to the spray paint earlier.  That’s the initial cooling of the plastic inside the mold.  When it first comes out of the mold, it’ll be solid, but it’ll be screaming hot.  As it cools further outside the mold, uneven cooling will cause the part to warp.  Thin parts cool faster than thick parts, so uneven walls tend to mean warped parts.

The sketches from the industrial designers are then used by development engineers to bring the concept sketch into three-dimensional CAD.  This process usually starts with a passive-aggressive verbal battle between the two before hyperbolic comparisons are directed at each other’s womb of origin and it all ends in some semblance of common perspective.  The dust settles and progress ensues.

What is the Strength/Fatigue Analysis for Plastic Injection Molding?

The development engineers will analyze dimensions and tolerances with respect to any other mating parts.  They’ll also evaluate strength and fatigue attributes where necessary.  Sometimes utilizing FEA for rigid parts.

What are the Material Considerations for Plastic Injection Molding?

Material selection involves far too much to cover with any meaningful depth here but suffice it to say that there are a ton of options out there.  Maybe there’s room for another post on plastic material selection alone?  If you’re not already experienced in this area, discussions with a good injection molding or plastics supply company rep can get you pointed in the right direction. 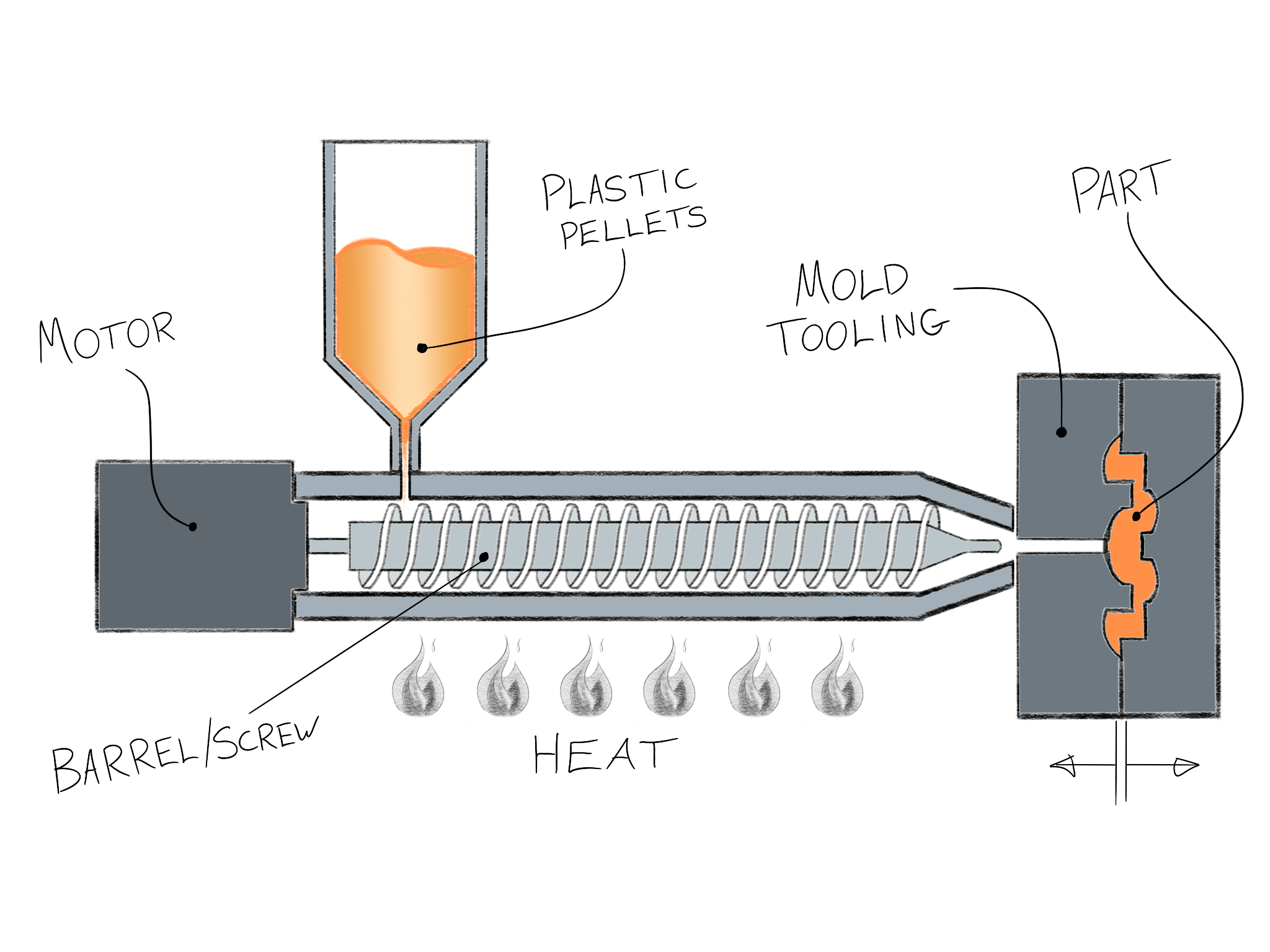 What are the Manufacturing Considerations for Plastic Injection Molding?

Engineers may have to get crafty at this point to design around restrictions and simplify tooling.

How is Plastic Injection Molding Prototyped?

What’s great about plastic injection molding parts is that they can usually be prototyped in a matter of hours.  The CAD models in the computer can be directly sent to a 3D printer and in most cases be made of a material very similar to the design intent.  Advancements in this technology are continuous and market competition is making it increasingly economical to pursue – sometimes even in the early concept phase just to get a hands-on feel of where a design is heading.

What is the Production Process for Plastic Injection Molding?

Plastic injection mold tooling is expensive and time-consuming to produce.  Since this is a hot, pressurized process, high strength alloy steel needs to be used to make reliable molds.  It’s expensive and it doesn’t machine easily or quickly.  Toolmakers not only have to cut away material in order to leave a precise open space for your part, but channels for risers, gates, vents, and ejector pins need to be added to that in addition to cooling lines for keeping the block of steel cool while molding.  On more complex parts, moving slides, removable cores, and other features for over-molding components need to be added.  It’s a long process and it’s not cheap, so it’s important that the design is validated prior to releasing a design for tooling.

This is the right blog for anyone who wants to find out about the plastic injection molding process. You realize so much it is almost hard to argue with you (not that I actually would want HaHa). You definitely put a new spin on a topic that’s been written about for years. Great stuff, just great!

Wow!🙂 Thanks for your awesome feedback, we’re so glad you enjoyed our blog posting.

I am planning to put up a business that manufactures plastic dog food containers. Therefore, I am considering to hire a plastic injection molding company that can help with design and manufacturing. Interestingly, after the designer and I come up with the concept, the engineer will then bring the concept sketch into three-dimensional CAD.

Hi Rachel, thank you for checking out our blog. 🙂 We’d love to assist you with any questions or services you might need once you get your business up and running!

Hi Ron, happy to hear you found our blog useful!🙂

It’s good to know that you need to select the proper material for your plastic extrusion project. My boss wants to some plastic extrusion for a top-secret project that he’s working on. I’ll pass this information along to him so that he can look further into his options for materials to use.

We’re glad you found our blog useful, Thomas! Any additional questions on the plastic injection molding process or any other plastic prototyping process, please do not hesitate to reach out!🙂

I can imagine that having injection molding is really helpful for businesses. It could be really helpful in shaping things. It was interesting to learn about how to mold is made to two parts that can open and close.

Hi Jenna, thanks for your positive feedback! If you have any further questions on the process or would like to know more, please feel free to reach out – we’d love to help!🙂

Thanks for explaining that the parts can be prototyped in a matter of hours. Because the service is so fast it seems like it would be very cost effective. I’ll have to look more into services for plastic injection molding.

Thanks for your feedback, David! If you have any further questions on plastic injection molding and the services we offer, we’d love to help! 🙂

That’s good to know that if you can’t have something in a mold that can be easily pulled apart without breaking that you probably wouldn’t want to use injection as a manufacturing method. I would think that would be a great way to get a lot of items made quickly if it would work though. It’s interesting to learn about how some of our items are made.

Thanks for checking out our blog, Tyler! We’re glad you found the information useful. 🙂