Nitinol is a shape-memory alloy with amazing properties.

You can take a straight piece of nitinol wire, bend and crumple it into looping ball in your hand and roll it across the table.  Then when you pick it up and toss it into a bowl of hot water, it will immediately spring right back out to its original straight shape with stunning speed and force.

It was first discovered in 1959 at the Naval Ordinance Laboratory where engineers were challenged with developing a nose cone for the first submarine-launched nuclear ballistic missile.  Among other metals that were being analyzed, it was noticed that cold bars of nickel-titanium alloy made a dull lead-like thud when they were dropped on the ground, but warm bars “rang like a bell”.  This hinted at something happening microscopically within the alloy in a unique way and lead to the discovery of its amazing pseudo-elasticity.

This gave it wide prospects of utility well beyond the nosecones of nuclear missiles, though its namesake harkens from that origin.

Pseudo-elasticity refers to a material that exhibits a reversible austenitic-martensitic crystalline structure in response to stress and heat.

“Austenite” and “Martensite” not part of your vernacular?

They are just fancy metallurgy-speak for the shape or pattern of arrangements among the atoms in a metal alloy.

Metals, microscopically, are actually crystal structures. Metallography involves the study of the composition and microscopic structure of metals where the particular crystal structure is important to define the properties of that metal. The crystal structure can be inspected under a microscope by polishing a small sample of a metal to a flat, smooth mirror finish. CDN developed an automated machine for LECO to prepare such samples for inspection.

With proper heat treatment, nitinol can be formed and set with its atomic crystal lattice of nickel and titanium in the body-centered cubic (austenite) structure. This is where the metal will snap back to when warmed.

As it cools, the crystalline structure rearranges to a face-centered cubic (martensite) structure without changing its outward shape. 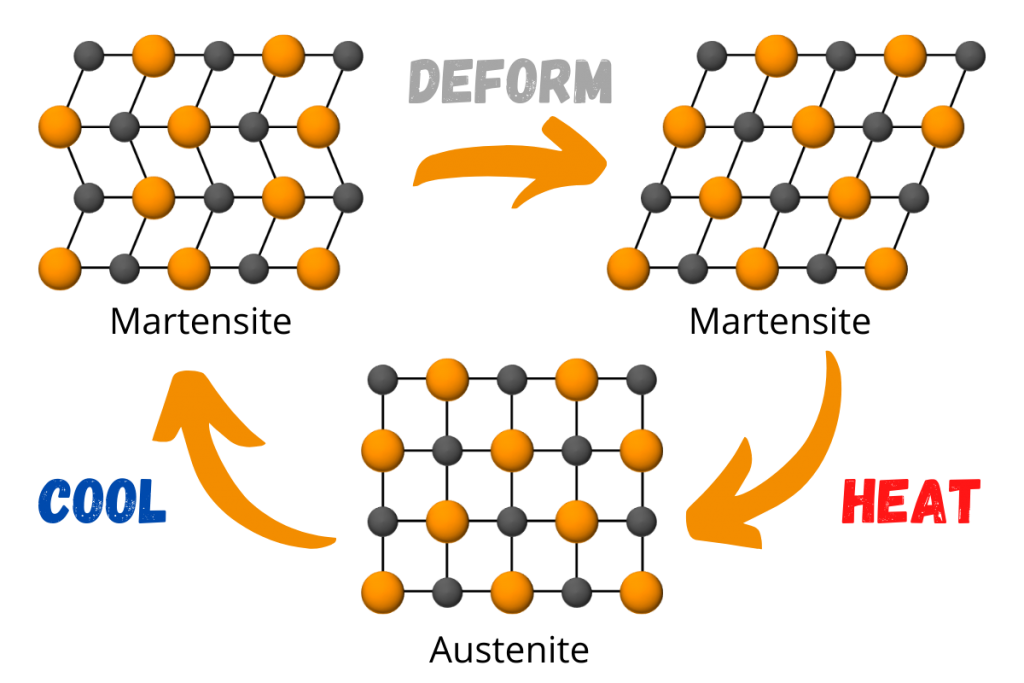 Now, it can be easily bent and deformed, though the crystalline arrangement will remain martensitic.

Apply just a small amount of heat to raise the temperature to around 100°F and the crystals will snap back to the original shape and austenite structure when it was heat-treated.

How is Nitinol Manufactured and Processed?

Different recipes of the nitinol alloy can alter the temperature at which the martensite-austenite transition occurs. The balance is nearly 50/50 Nickel and Titanium with small changes in the ratio having a large impact on the transition temperature.

Some applications may need the springy austenite structure at room temperature without regard to any transition. These will have a higher nickel content. Other uses may rely on the transition to perform a certain function at a specified temperature range.

Nitinol can be difficult to produce since titanium is highly reactive with both carbon and oxygen. The environment must be controlled, so the alloy is typically made in a vacuum and great care is taken to exclude any potential impurities that would disrupt the nice even crystal lattice.

Impurities have a detrimental effect on the fatigue life of nitinol – more on that later.

The unique properties of nitinol that make it attractive for unique uses also make it difficult to deal with when manufacturing parts from it.

First, this material is difficult to machine and forge. Its properties of pseudo-elasticity directly resist such manipulation and tends to dull cutting tools. Processes that don’t rely on mechanical shearing or deforming like abrasive grinding, laser cutting, or EDM are fine though.

It’s difficult to weld due to the same sort of challenges in excluding impurities while making the raw alloy.

Also, though not particularly difficult to execute, heat treating nitinol is uncommon and requires specialized knowledge to be executed properly.

All these factors put nitinol in a more exotic category of alloys, thus making the material expensive.

Where is Nitinol Used?

Hermetically sealing pipe couplers rely on metal collars shrinking to connect and seal the outsides of two facing pipe sections. These will be made of a shape memory alloy like nitinol or a copper-aluminum-nickel alloy.

Though the transition temperature change in nitinol is fantastical, it’s most commonly used for its superelastic mechanical properties – unrivaled in its ability to hold a shape. There are a lot of cases where daily activities require a blend of flexibility and form.

Nitinol just might be closer to you than any other metal and you’ve never known it. It’s used for that in headphone bands, watch springs, underwire bras, and those nearly indestructible metal glasses frames. Closer still is the internal uses for nitinol. Provided you don’t have a nickel allergy, it’s a great material for braces and medical artery stents. The springy form and corrosion-resistance are just what surgeons and dentists need. 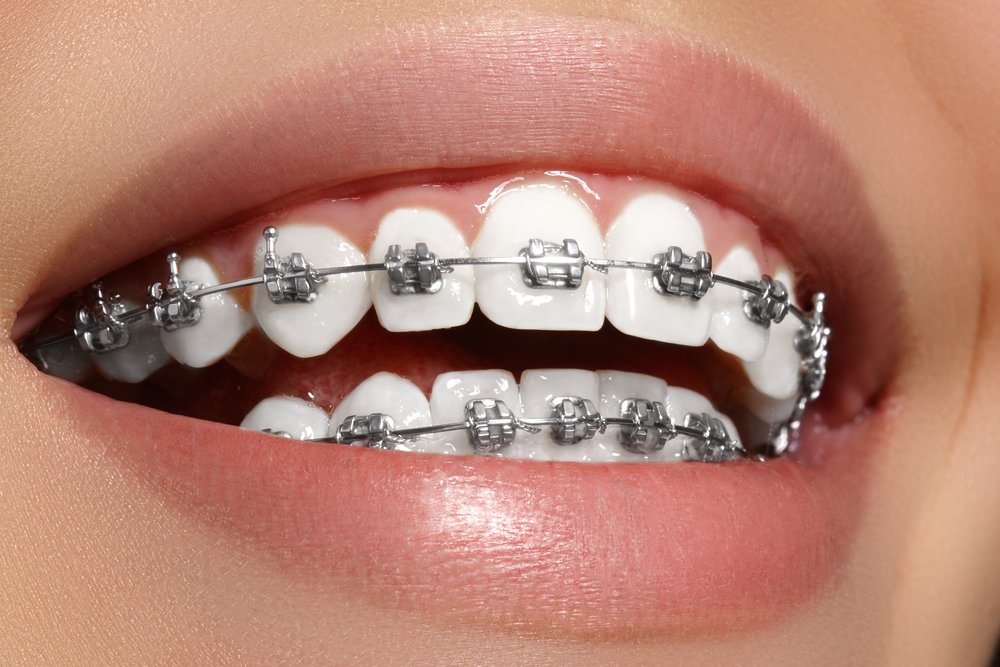 Less visibly but at work in the world around us, nitinol’s exceptional mechanical damping properties are employed internal to other materials.

This is that dull thud when cold vs ringing like a bell when hot property that initially tipped off researchers to nitinol’s uniqueness.

A little bit of this metal can go a long way in taking out unwanted vibrations. Used inside golf clubs and other such sporting equipment, it takes out the high frequency vibrations from sharp impacts. It’s also embedded in concrete used for bridges where it provides tensile strength to the bridge section and helps to dampen natural frequencies that otherwise would allow a stiff wind to tear the bridge apart (like Galloping Gertie).

What is a Nitinol Engine?

If the concept of a nitinol engine didn’t initially bring you here, your mind might have already strayed to this.

A mechanical spring that is only sometimes a spring? Just heat or cool it slightly to change that? What a marvel!

Researcher Ridgeway Banks went to task on this in 1973 when he built the first nitinol engine. It relied on moderately solar-heated water to drive the temperature transition in nitinol wires and outputted a rotational powered shaft for use in any manner of machinery. No fuel, no pollution, only a small variation of temperature needed in a range we live in all over the surface of this planet. It seemed the answer to “free energy”. Ridgeway Banks kept working at perfecting this for the following decades and was joined by a multitude of individuals and corporations pursuing the same goal.

Unfortunately though, it seems so far to be an unsolved problem. The two main factors stifling developers are low efficiency and nitinol fatigue failure.

Efficiencies have been measured in the range of 20%. If the temperature differential truly is abundant and free (solar, geothermal, etc.), this is no issue because any amount of energy is beneficial with essentially no cost once the machine is operating – aside from construction and maintenance costs.

While nitinol can be used for those nearly indestructible glasses frames, they do have a limit. A typical car engine runs between 500-5,000 revolutions each minute. If you’d bend your glasses as often as nitinol would be bent in a cycling engine they’d break too.  Although nitinol IS superelastic and has an incredible fatigue life, it does have its limit. High cycle engines (as they are) reach this limit rather regularly. Parts break and have to be replaced.

So far, a solution has not been found that has an efficiency high enough to overcome the cost of replacing parts. Nonetheless, it is still an intriguing proposition!

How do I use Nitinol in My Product?

One of the greatest benefits of nitinol being discovered relatively recently is that the interest provoked by publicity pulled in a great deal of researchers. This also happened at a time when computers and scientific instrumentation were sufficient for the task. As a result, there is a cache of digitized scientific papers on the alloy.

For engineers, it’s a delicious meal. For the less quirky of us, suffice it to say that the general understanding of nitinol (which you now have) can suggest what is plausible.

Think of what a “sometimes spring” can do for you, or a vibration damper, or where a non-kinking corrosion-resistant metal strip could be used. The details can be worked out.